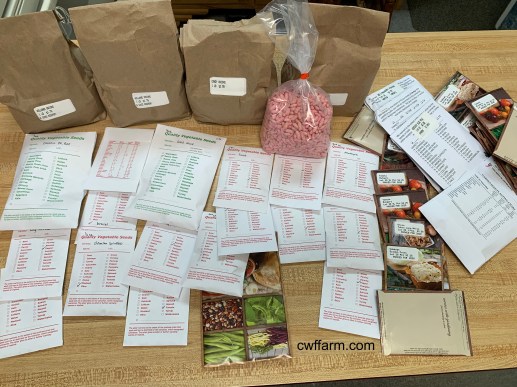 A long and busy day today, we were delighted to hear some of our back ordered seeds had come in and we had to plan a trip to pick them up along with other supplies for the farm. A number of us farmers were talking about the possibility of many of our farm events being cancelled this year and how tight things were getting. As if things haven’t been tough enough the past few years, now we have the closing of so many events and loss of jobs. Farmers are not eligible to get unemployment which compounds the finances especially this time of year. Or as my dad always said it’s the spice of life! I for one would certainly forgo the spice for a more bland type of life should life be willing?…

It is unfortunate that most of today’s seeds for vegetables come from overseas. With the embargoes, tariffs and now pandemic diseases many of the seeds are floating in the middle of the ocean waiting for clearance to come into port and from all indications that isn’t happening anytime soon.
One of my best and biggest selling peppers just happens to be one that not only was there crop failure from the company causing major shortages but what few seeds that are available are on those ships floating out in the sea. Ah yes such comforting information especially at this time of year.

We have enough seed from today’s pick up to keep me busy planting in the greenhouse for a day. Sure wish we would have more than a few hours of sunshine though plantings are just sitting there peeking out of the soil waiting very patiently for the sun to shine, I am waiting too but not as patiently.

We have high hopes some of our other back ordered seeds will be in soon we have a feeling that when the weather breaks we’re going to be pretty busy playing catch up on the many chores needing done around the farm.

We have been busy taking care of an elderly friend of mine most of last year and this. His wife passed away just before Christmas. He is in his late 80’s with too much time on his hands to think so besides organizing, washing walls, windows, curtains and thousands of beloved nick knacks of his wife’s. We try to keep him occupied and busy to keep his spirits up. Jim & I have been friends for over 40 years we used to fly hot air balloons and planes together so we often start reminiscing about old times and how we oughta go flying again. Although it was memory packed fun it sure was one expensive hobby but if I had the money would jump in again in a heartbeat. Jim has quite the old car/truck collection too so on good days we help him with whatever he wants to do to them. So far he has kept us busy jockeying them around in his garages just for something to do. Oh well it keeps him busy and certainly keeps him going. However being a very independent 88 year old cuss it has been challenging trying to keep him safe from this coronavirus. He retorts to me almost daily “I didn’t live to be my age out of fear of some damn ole virus and there ain’t no dam virus going to take me out. At least not without a helluva fight.” Then he looks at me with a twinkle in his eye and grins, then says “ok if I can’t go out to eat whatcha fixin me tonight?” So I’ll just add chef, along with chief bottle washer, maid, handyman and repairman to our resume. Hummm I wonder if Jim would like to learn how to seed plug flats that just might keep him busy for a minute or so…

We’ll have our farm market trailer at Glenwood United Methodist Church parking lot in Columbus this Saturday from 10-1. I will post later in the week what all we will have available. There sure has been a run on things but we don’t have TP.