She came into our lives 14 years ago at 1 year of age back in 2005. She was a petite sweet little Lhaso/Pomeranian mix dog. Her family could no longer care for their 6 dogs due to the husbands health issues and as I had a dog rescue we accepted their whole clan of dogs. We did Boxer, Great Dane and Mastiff rescue but these 6 dogs were wee little dogs a Lhaso Apso, a West Highland Terrier, a Boston terrier, a Pekinese, a Yorkshire Terrier and a Lhaso/Pomeranian mix.

None of these small dogs had any formal training so that was the first order of business, to get their obedience education started along with house

training,  hygiene, manners, socialization, vaccinations, heartworm prevention, spayed and neutered and learn agility work with the goal of adopting them into good homes to live out the rest of their lives. Now these were all small dogs I am a large dog lover/handler. Oh I appreciate and like little dogs but they do not hold a candle to large dogs and besides they can be extremely temperamental, stubborn and at times arrogant and often times a nuisance.  Fortunately they all took to their training and after 14 weeks they were all ready to find their new homes, well all but one. She was a tiny 7 pounder; she was happy

go lucky, eager to learn and had no stubbornness or arrogance about her back then.

The other five dogs we found great new homes for but Gracie well she had adopted us and there was no denying her of her choice. Gracie had a zest for life, she enjoyed going to hospitals and nursing homes to visit and she was so good with Alzheimer patients. She loved to sit in your lap and look longingly into your eyes with the biggest grin on her face. Gracie loved to do agility and delighted in playing tug with a large thick rope 3 times her size. She would carry her tiny toys around from room to room just waiting to play fetch with you. Her favorite spot was in hubby’s lap where she would lean against his chest and use her paws to stroke his face while those big eyes looked adoringly at him.

Gracie was a scrapper too contrary to our veterinarian’s comments the first time we took her in after she had adopted us. Our vet said with a huge grin on her face “oh my you have a Fufu dog; I thought you only liked large dogs. Kind of a stretch for you isn’t it?”  We just sheepishly grinned and decided not to answer any incriminating questions.

Gracie and our Boxer Sandy became best of friends and were

inseparable. They shared everything especially Sandy’s large bed. Although I think the sharing was a bit one sided for it was Sandy who tried so hard to curl up in Gracie’s tiny bed as Gracie stretched out on Sandy’s big bed.  Gracie would always go to Sandy and lick her face as if to say “it’s ok, I don’t mind you sleeping in my bed.” That wasn’t really Sandy’s choice. At one time we had 9 rescue dogs here at one time for various stages of training and socialization not knowing all their temperaments I was often cautious with

the large dogs getting near Gracie but in her bull headedness she would slip through the baby gates and go visiting with all the different dogs and to my surprise none of them thought of her as prey they were so astonished this tiny dog walked right up to them and gave them a kiss that they just froze in astonishment.

A few years later we took a Great Dane female in who had been in a very abusive situation so much so she had the tendency of a possible fear biter and she was terrified of other dogs. It was a challenge keeping Gracie and Sandy in their spaces and away from this Dane until we were able to assess this Dane and work with her more but it was going to take time. I had to revert to crates to separate them, something Gracie and Sandy were not fond of. After several successful weeks I must of let my guard down for there was a commotion in the living room and as I ran to see what had happened there was Sandy and Daisy the Great Dane lying on the large kuranda dog bed

side by side and low and behold who pops their head up from behind the Dane none other than Gracie as she jumped on the Danes back and proceeded to paw at the top of her head. I thought oh no any minute now the Dane would snap at her but to my surprise she just lowered her head and turned her shoulder down to get Gracie off then proceeded to very gently play with her. From that day on for 12 years those three were inseparable. When Sandy passed of old age Gracie was distraught and so was

Daisy but they helped each other grieve. Then it was just a twosome until the day Daisy the Dane passed away and Gracie mourned for a long, long time until an unruly Jack Russel we named JaKay came into our lives, again a rescue dog we took in to train and adopt to a new home. We became her new home and although Gracie and JaKay became buddies there was not the closeness Gracie had with her Sandy and

Daisy. That was when Gracie took on her arrogance and stubbornness and ultimately became very temperamental.

Gracie enjoyed going for long walks and especially loved going for rides in the back of the “farm Cadillac” she loved her ears blowing in the wind. Gracie loved her spa days when she and Jakay would go to the groomers to get as we told them “beautified.” When they heard that word they were on pins and needles until they arrived at the groomers.

When we would go pick them up that was when Gracie acted like a Fufu dog all prim and proper, bows in her hair, hair cut short she did not like her wiry shaggy coat she loved to be as short as possible. She would be a princess for a day then it was back to being a farm dog ready to hunt, roll in whatever and play tug of war. 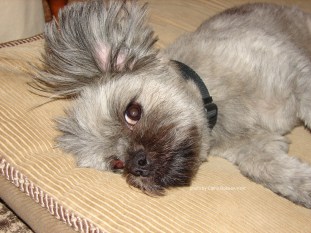 last year in her right eye and after a course of unsuccessful treatment we had to ultimately remove her painful eye. That seemed to knock the sails right out of her.  Although it gave her another year she ever so slowly started going down, no longer the zest for life or should say her zest was occasional a day here and there. For the past year since her eye surgery she became very finicky with her food, became very difficult to medicate and sometimes even give a warning snap followed by a quick kiss as if to say “I’m sorry.” We have watched 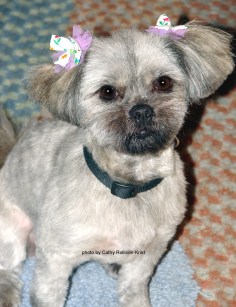 age take its toll on our little sputnik but it never took her spirit totally away from her.

For the past two months she would have 2-3 bad days followed by four to five good days but that was ok we just made her comfortable and catered to her.  She didn’t want to go outside much anymore she longed to lay in her many soft beds upstairs in the bedroom but her favorite place was dragging a bed under our bed and sleeping there. Through the day when we would be out working she would drag her bed to the doorway of the bedroom so she could watch down the hall for when we came upstairs and often times when we would come home from a market we would run up to get her and get the big dogs out to

potty, there she would be watching down the hallway awaiting our return slowly getting up to greet us.

This week Gracie’s appetite was less and less until she stopped eating. The only food I could get in her was the soft stuff I would place on her upper lip so she had to lick it off. She grew weaker and weaker this evening she began to crash and we called our vet to help our little princess across the bridge. As our little girl took her last breath the three of us, hubby, our dear vet Sandy and myself, stood in 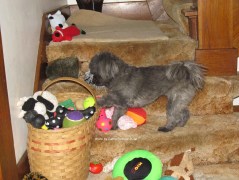 that exam room as we have done so many times over the past 30+ years holding each other, reminiscing about all our wonderful pets and letting our tears flow.

For as little as Gracie was she has left a large void in our hearts and her JR buddy Jakay is so lost without her. Our big boys are laying at my side as I write this, every few minutes setting his large head on my feet as though saying “its ok mom, I’m here for you”, as big crocodile tears roll down his face. Heck as big crocodile tears roll down mine. Rest in peace little Gracie you are finally reunited with your beloved Sandy & Daisy along with all the other great dogs who have

touched our lives. Give them all our love and let them know we will see you all soon. 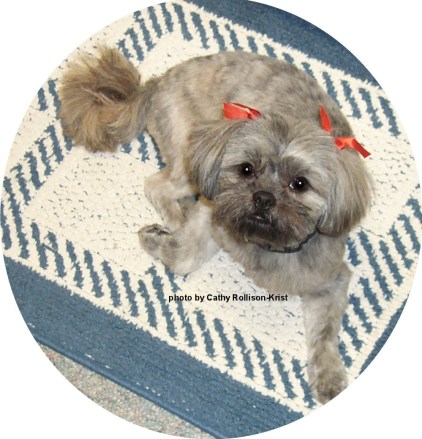